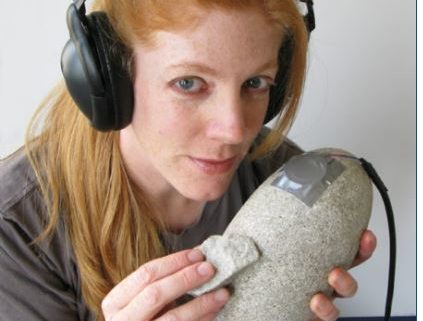 The 2018-19 season of Musical Ecologies opens Thursday, September 20 with San Francisco-based composer, performer, and instrument-builder Cheryl E. Leonard. Making a rare New York appearance, Leonard will present a set of music that investigates how climate change is transforming polar environments and ecosystems. Performing with an array of amplified stones, wood, water, sand, seaweed, shells, and bones, in combination with field recordings of natural soundscapes, she will perform works from Antarctica: Music from the Ice, a series of compositions developed from her experiences on the Antarctic Peninsula in 2008-2009 as a grantee of the National Science Foundation’s Antarctic Artists and Writers Program. Also included will be music inspired by a 2011 residency in Svalbard, an archipelago in the High Arctic north of mainland Norway. Her performance will be accompanied by videos from visual artists Oona Stern (Brooklyn) and Genevieve Swifte (Australia). The evening will begin with a conversation hosted by series curator Dan Joseph.

Now in its sixth season, Musical Ecologies is a monthly symposium on music and sound held at the Old Stone House in Park Slope, Brooklyn. Curated and hosted by composer Dan Joseph, each event typically focuses on a single artist who presents a work or project either in the form of a talk or lecture, a multimedia presentation, a performance, or combination thereof. Each presentation is preceded by an extended conversation with the curator and audience.

Cheryl E. Leonard is a San Francisco-based composer, performer, and instrument builder whose works investigate sounds, structures, and objects from the natural world. Her projects cultivate stones, wood, water, ice, sand, shells, feathers, and bones as musical instruments, and often feature one-of-a-kind sculptural instruments and field recordings from remote locales. Fascinated by the subtle textures and intricacies of sounds, especially very quiet phenomena, she uses microphones to explore micro-aural worlds hidden within her sound sources. Her musical forms frequently reflect on or model themes connected to natural phenomena and processes, and most of her recent projects relate to climate change in the polar regions or California. In addition to creating solo work, Leonard has produced numerous installations, videos, and multimedia works with visual artists; composed for film, video, dance, and theater; designed sounds for exhibits in science museums; and worked with climatologists, oceanographers, and biologists. Leonard’s music has been performed worldwide, and her instruments, installations, and graphic scores have been exhibited in art galleries in the U.S., Norway, Australia, Mexico, and Argentina.