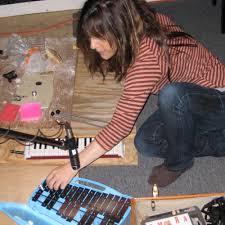 Join us for the next installment of the monthly series Musical Ecologies with sound artist, composer and electroacoustic musician Andrea Parkins. A participant of sound art/experimental music communities worldwide, she is known for her pioneering gestural/textural approach on her electronically-processed accordion & virtual instruments. Described as a “sound-ist,” of “protean,” talent by critic Steve Smith, her laptop electronics, amplified objects & Fender-amped accordion create fields of lush harmonics, concretized disruption & sculpted electronic feedback. The evening will begin with a conversation hosted by series curator Dan Joseph, and a reception will follow.

OSH Will Be Closed Sunday, October 9 for a Wedding