Icons In Their Own Right – Works by Makeba Rainey 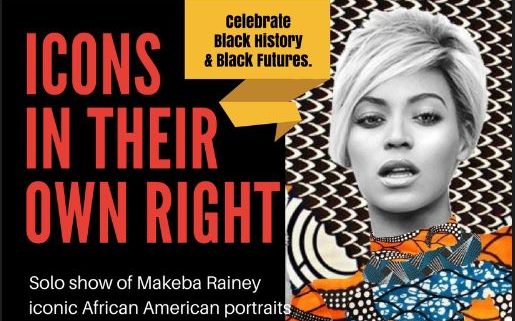 Makeba “KEEBS” Rainey is a Harlem native inspired by her community and fellow emerging visual and performance artists.  She is the founder of Black Capital Coalition (BCC), which promotes both visual and performance artists through creative collaborations between artists, businesses, and cultural institutions. Icons in their Own Right seeks to remedy historic erasure, champion cultural representation, and reinforce identity and pride. Makeba’s artistry is heavily influenced by hip-hop culture and Black consciousness.  She carefully chooses each photograph of her characters to reflect a demeanor of confidence and power. She then selects an African-themed design that best contextualizes each figure’s attitude, creating an a exchange of multiple layers and emotions. We hope visitors will be inspired, among others, by President Obama resting in his power, Grace Jones posing confidently, Solange’s exhibiting quiet strength and Langston Hughes looking casually amused. These are meant to be faces of mastery, intrigue, and calm, culminating in a rainbow of Black excellence that resonates with every walk of life.