A Conversation with Matt Stoller, author of “Goliath”, and Zephyr Teachout 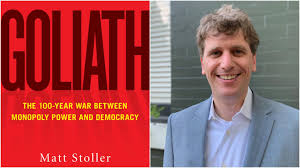 Author Matt Stoller and Zephyr Teachout hosted a great a conversation centered on Stoller’s debut book Goliath: The 100-Year War Between Monopoly Power and Democracy, from Simon & Schuster Publishers.  Thanks to act.tv, you can listen here!

Goliath examines how concentrated financial power and consumerism transformed American politics, resulting in the emergence of populism and authoritarianism, the fall of the Democratic Party—while also providing the steps needed to create a new democracy. You can read more about the book on the Simon & Schuster website here.

Stoller is a Fellow at the Open Markets Institute. Previously, he was a Senior Policy Advisor and Budget Analyst to the Senate Budget Committee. He also worked in the US House of Representatives on financial services policy, including Dodd-Frank, the Federal Reserve, and the foreclosure crisis. He has written for The New York Times, The Washington Post, The New Republic, Vice, and Salon. He lives in Washington, DC.

Teachout is an Associate Law Professor and has taught at Fordham Law School since 2009. She grew up in Vermont and received her BA from Yale in English and then graduated summa cum laude from Duke Law School, where she was the Editor-in-Chief of the Law Review. She also received an MA in Political Science from Duke. She clerked for Chief Judge Edward R. Becker of the Third Circuit Court of Appeals. She was a death penalty defense lawyer at the Center for Death Penalty Litigation in North Carolina, and co-founded a non-profit dedicated to providing trial experience to new law school graduates. She is known for her pioneering work in internet organizing, and was the first national Director of the Sunlight Foundation. She has written dozens of law review articles and essays and two books. Her book, “Corruption in America: From Benjamin Franklin’s Snuff Box to Citizens United” was published by Harvard University Press in 2014.
She ran unsuccessfully for the Democratic nomination of the Governor of New York in 2014, and for Congress’s 19th Congressional District in 2016.

The author’s portrait is by Sophia Lin, the book cover image is property of Simon & Schuster, Inc.

Spellbound Theatre: “Up & Down Again”