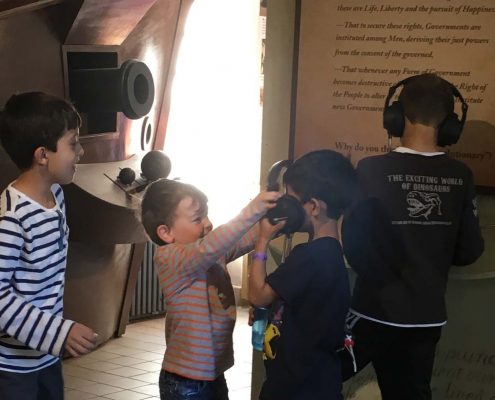 The Old Stone House: Witness to War – An Exhibit Exploring the Battle of Brooklyn and the Occupation, 1776-1783

Opening in August, 2016, in time for the 240th anniversary of the Battle of Brooklyn, Old Stone House: Witness to War is a self-directed exhibit that takes visitors on a journey through the Revolutionary Era in Brooklyn from 1776 until 1783.  Ten themed areas allow visitors to explore this history and consider how war impacted the community, what choices citizens had to make at the time, battle strategies, and what makes these issues relevant in today’s world. 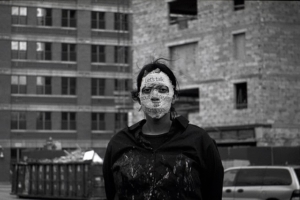 The Artwork of Alicia Grullón

Presence is an exhibition curated by Katherine Gressel which explores the evolution of artist Alicia Grullón’s socially-engaged work over 15+ years.

Grullón describes her performances, both live or for photography or video, as “critiques of the politics of presence – an argument for the inclusion of disenfranchised communities in political and social spheres.” By inserting her own body in spaces “that have historically not been meant for [her] or designed so [she has] little control over how [she is] represented in them,” Grullón aims to disrupt mainstream historical and cultural narratives.  This includes collecting and performing the stories of individuals whose voices might otherwise be absent. Her interventions have included public spaces, cultural and academic institutions, the dominant history of the United States, government policy, environmentalism, feminism, the United Nations, and the mass media.

In the tradition of deconstructionist philosophy, Grullón’s work challenges traditional binaries between past and present, and presence and its typical opposite, “absence.” In her photographs, “what is alluded to within the frame is largely informed by what is not in the frame.”  In addition to evoking missing narratives from past, current, and future events, the work selected for this exhibition focuses on Grullón’s use of costumes, props and other methods of obscuring her own identity (leading to the absence of a uniform artist figure throughout the work), sometimes to augment the voices of others. In her essay “The Missing Body: Performance in the Absence of the Artist” Cindy Baker argues that through this type of physical obfuscation, “risk, transgression, and a false illusion of distance are taken on by both artist and audience member, expanding a capacity for intimacy between artist/art and audience that few artworks can.” Through inhabiting a world of her own creation, Grullon also subverts a traditional European, male gaze.

In keeping with OSH’s mission to make local history relevant, Presence is comprised mainly of works rooted in Grullón’s native New York City and that address such topics as gentrification, immigration and community preservation. Several works on view were  inspired by OSH itself and its Dutch Colonial and Revolutionary War past.

Presence is the first in a series of four 2020 OSH exhibitions exploring how contemporary artists encourage participation and civic engagement.

On March 26 from 7-9 p.m., we invite the public to view Storytelling, a performance for video in which Grullon re-enacts stories as they were told to her by seniors at the Jackie Robinson Senior Center in Harlem. A Q&A session with the artist and curator to follow. Additional public programs may be added at a later date- check the OSH website or newsletter for more information.

Alicia Grullón’s work has been shown at the Bronx Museum of the Arts, El Museo del Barrio, Columbia University’s Wallach Art Gallery, BRIC Arts, Spring/Break Art Show, and Performa 11, among others. Grullón is also a contributing author to Rhetoric, Social Value and the Arts: But How Does it Work?, ed. Nicola Mann and Charlotte Bonham-Carter (Palgrave Macmillan, London) and Bridging Communities Through Socially Engaged Art, ed. Alice Wexler and Vida Sabbaghi (Routledge, New York). Grullón is an Artist in Residence at The Hemispheric Institute of Performance And Politics at New York University. Other Recent activities include the Shandaken Project inaugural artist residency on Governors Island and the Bronx Museum of the Arts AIM Alum program at 80 White Street. Grullón is the recipient of the inaugural Colene Brown Art Prize for 2019. Grullón is an adjunct professor at The School of Visual Arts and City University of New York (CUNY). She is from and based in New York City.

Katherine Gressel, the Old Stone House & Washington Park’s Contemporary Art Curator, is a New York‐based curator, artist, and writer focused on site‐specific art. She earned her BA in art from Yale and MA in arts administration from Columbia. Katherine’s previous exhibits dealing with such topics as income inequality, urban agriculture, and parks have been recognized by the New York Times, Time Out New York, Hyperallergic, News 12 Brooklyn, and DNAInfo. In addition to organizing eleven major exhibitions to date at the Old Stone House, Katherine has curated for FIGMENT, No Longer Empty, St. Francis College, and Brooklyn Historical Society, and was the 2016 NARS Foundation emerging curator.  She was selected for the 2015 Independent Curators International (ICI) Curatorial Intensive in New Orleans. Katherine has written and presented on public and community art issues for Createquity, Americans for the Arts, and Public Art Dialogue, among others. Katherine also served as Programs Manager at Smack Mellon Gallery from 2010-2014, and has worked and consulted for diverse nonprofits. 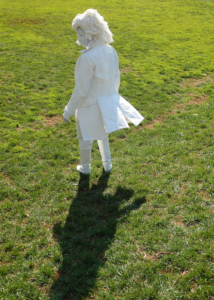 Curated by JoAnne McFarland and Sasha Chavchavadze, SALLY was a collaborative project which brought together artists, writers, and performers intrigued by the narratives of women, like Sally Hemings, whose destinies are inextricably interwoven with those they knew, and whose lives have often been erased or forgotten.

At this critical juncture, with women’s autonomy once again under siege, another meaning of sally seems particularly relevant: a sudden charge out of a besieged place. SALLY showed how artists, through their methodologies, confront myriad issues of agency, and use community and collaboration to undercut the status quo, and construct lives of integrity and purpose.

Curated by Katherine Gressel, this exhibit brought together emerging artists Tahir Carl Karmali and Justin Sterling to respond to the Old Stone House’s unique space. Both artists use reclaimed and abstracted vernacular materials––including used cell phone batteries and broken windows––to symbolize local and global policies that contribute to inequality and displacement. The title “No More Water” also implies our current climate emergency (characterized by increased floods, wildfires, and water contamination) and an urgent call for action.

The artists chose “No More Water” to reference James Baldwin’s 1963 publication “The Fire Next Time,” which begins and ends with the line, “God gave Noah the rainbow sign, No more water, the fire next time!”, quoting the spiritual “Mary Don’t you Weep” and alluding to the Old Testament story of God flooding a corrupt earth. “The Fire Next Time” is considered a galvanizing text for the American Civil Rights movement in its examination of racial injustice and its call for all people of “consciousness” to “change the history of the world.”

Funding for No More Water  is made possible, in part, by the Puffin Foundation and the New York City Department of Cultural Affairs.

Race and Revolution: Reimagining Monuments, curated by Katie Fuller, questioned the relationship between historical memory and historical monuments and the implications of the histories that remain absent. Through drawings, quilts, interactive sculptural pieces, public art and paintings artists Kimberly Becoat, Alex Callender, Maureen Connor/Institute for Wishful Thinking, DARN Studio, Damien Davis, Rose Desiano, Ayasha Guerin, Zaq Landsberg, Jennifer Mack Watkins, Maureen McNeill, Lyra Monteiro, Sal Muñoz, Marilyn Nance, Emmaline Payette, Chip Thomas and Kamau Ware were concerned less with erecting massive symbols that define a limited perspective than they were in creating inclusive, dimensional histories. Their works addressed the often debated controversies around such figures as Christopher Columbus, George Washington and J. Marion Sims, and also offered insight into how collective thinking has shaped New York’s story, confronting not only what we remember and memorialize, but how.  Katie Fuller was an educator for eleven years before curating her first show, Race and Revolution: Exploring Human Injustices through Art, in the summer/fall of 2016. Her second show, Still Separate – Still Unequal, opened at Smack Mellon in summer 2017 and will finish a two-year tour at the August Wilson Cultural Center in Pittsburgh in summer 2019. She has another project titled Unbroken by Bars that addresses justice-involved women face and overcome.

Funding for Race & Revolution: Reimagining Monuments has been made possible, in part, by  the New York City Department of Cultural Affairs and the Puffin Foundation.

“Processing” is defined as “a series of changes taking place in a definite manner,” including the “systematic organization, treatment or preparation of materials.” The artists in Processing all manipulate art materials through intentional, systematic procedures that sometimes incorporate chance. The resulting work teeters between representation and abstraction – teasing recognizable forms out of abstract ones or abstracting recognizable elements through stripping down or layering/obscuring. Specific works were selected for the exhibition that can trace the evolution of most artists’ work processes.

Made possible, in part, by The Shelley & Donald Rubin Foundation and the New York City Department of Cultural Affairs.

Six women artists explored public and private acts of strength and resistance by women in times of social or political upheaval— inspired by their own family and community histories as well as craft and other work traditionally associated with the home.  Featuring Lauren Frances Adams, Golnar Adili, Aisha Cousins, Maya Jeffereis, Lorena Molina, Katherine Toukhy

Made possible with support from the Puffin Foundation, and the New York City Department of Cultural Affairs.

A contemporary art exhibit curated by Katherine Gressel, considering how our immigrant nation has historically accommodated multiple peoples and perspectives–and the role of artists and art institutions in presenting and preserving their stories, featuring the work of artists Cecile Chong and Natalia Nakazawa.

This program was supported, in part, by public funds from the New York City Department of Cultural Affairs, in partnership with City Councilmember David Greenfield.

Common Ground Gowanus celebrated the creativity nurtured in the neighborhoods around the Gowanus Canal.

In Search of One City explored artists’ role in investigating, navigating, and mitigating income inequality, with a focus on New York City.  Check out one of the exhibit’s public programs: Creating for Hire: Supporting a Thriving Artistic Practice through Commissions a BK Brainstorm courtesey of BRICartsmedia.

In TRANSITion (2013) brought together 19 artists and arts groups responding to differing visions of ideal urban transportation systems or proposing their own.

Park Space, Play Space brought together 19 artists and arts groups to address the ideal design, planning and use of public parks.